To share your memory on the wall of Dorothea Tolbert, sign in using one of the following options:


Dorothea was born on Sunday, February 7, 1960, in Brooklyn, NY to the Late Clarence Milton Ellis & Dorothy Lee Copeland Ellis.
As early as age 4, she discovered her love of reading the New York Times. Later in her adult years, she always wished she would’ve studied journalism. She read the newspaper seven days a week until becoming ill in 2012.
At the age of 15, Dorothea accepted Christ as her Lord and Savior. In 1978, she graduated from Jamaica High School in Queens, NY. To continue her education, Dorothea attended Queensboro Community College. while in college, she was faced with the sudden passing of her Mother and was unable to complete the semester.
Dorothea loved to travel. Memphis, Tennessee was her favorite. Born and raised Church of God in Christ, she enjoyed attending the annual COGIC Holy Convocation often. She would sing in the national choir led by the Late Dr. Mattie Moss Clark. She was surrounded by two things she loved - good church and good music.
In her first job at the age of 17, she was operating as a secretary at her uncle’s law firm. She held that position during the summers of 1977 - 1981. In June 1982, she became the Supervisor of Correspondence at the Veterans Administration Clinic located in Brooklyn, NY. Dorothea would hold 3 more jobs in the area of administration before marrying.
In August 1988, she married Vergis Tolbert III. From this union, Dorothea gave birth to her only son, David Sebastian & her only daughter, Karen Yvette. To assure her children were raised and well cared for at all times, Dorothea became a full-time Mom until her daughter was 4 and her son was 6. Family was important to her. From that point, she re-entered the workplace working nights. She didn’t believe in babysitters. Her mornings were spent taking both of her children to school. She loved her children to no end.
In 2001, Dorothea received her New York State security license. The following year, she received her New York State fireguard/security certification. She was very nervous about taking those exams and always took pride in her accomplishment. In the summer of 2006, Dorothea, her husband, and children moved to Mount Vernon, NY. In November 2007, she began working at a Nursing Home as a security guard up to the very day of suffering a major stroke in October 2012.
Dorothea was a fighter. She was far from a quitter. She became disabled but had the full support of her husband and children. She enjoyed her food and her TV. A couple of her favorite shows were Law & Order SVU and NCIS.
Her health was improving, but on June 2019, she suddenly became ill. Even then, she didn’t give up. She kept fighting, fighting, and continued to improve until Sunday, July 28, 2019.
She leaves to mourn & cherish all of the precious memories: Her Husband – Vergis Tolbert III, Her two children – David S. Tolbert & Karen Y. Tolbert. Her Two Sisters – Celeste M. Ellis & Beatrice Ellis Wells, One Brother-In-Law – Ronald D. Wells and a host of Aunts, Uncles, Cousins, & Friends.
Read Less

Receive notifications about information and event scheduling for Dorothea

Show you care by sending Flowers

We encourage you to share your most beloved memories of Dorothea here, so that the family and other loved ones can always see it. You can upload cherished photographs, or share your favorite stories, and can even comment on those shared by others. 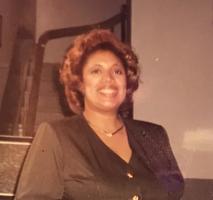